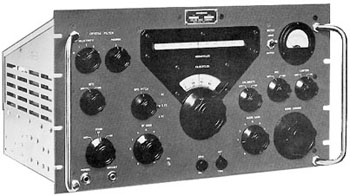 Click to view Circuit or Block Diagram in a new window.

The 51J-4 is a product of the Collins Radio Company. These sets were built in the later years of the 1950's and were used both by the military and commercial organisations.

Like all Collins equipment of the period, extensive use of mechanical parts made these sets fine performers and enabled features to be included unlike those of other manufacturers.

The URR390 and URR391 were also in use during this period, although these sets were much more ruggedly designed.

Prior to this series was the ARR15 aircraft receiver, which also included fine mechanical facilities.

The 51J-4 covers 500kc to 30.5 mcs in thirty bands. The P.T.O. oscillator is renowned for its stability and makes the sets much sought after.

An article comparing the 51J-4 with the FRG-7700 appeared in Silicon Chip, August 1990 (p82) and makes very interesting reading.

The set features single/double or triple conversion, depending on which band is selected. Also included are 3 mechanical filters, which provide razor sharp skirt selectivity, although with 6kc being the widest bandwidth available, it probably proves a little bit too narrow for those who enjoy fidelity.

Unfortunately the set was not designed for SSB. The lack of a product detector has generated many conversion articles, with a suitable circuit being included in the article noted above.

Like all Collins gear, it is built to last and is capable of excellent performance.