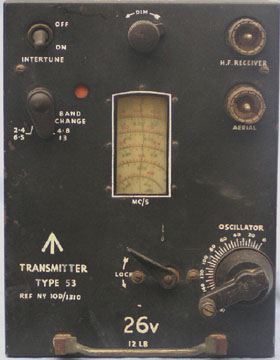 This unit is part of the ARI 5206 equipment. In combination with receiver 78, it forms the major part of the "Two In Line" HF equipment. The Type 78 modulator supplies power, audio and IF strip for the above units.

The transmitter uses a VT 60A (807- ATS25) in a tri-tet oscillator driving an output circuit using two VT6OA's in parallel. For the higher frequency range, the frequency is doubled in the output amplifier.

Tuning is by rotating coil throughout. All circuits are ganged and driven by one large dial with a spiral scale (with the exception of the aerial circuit which has its own tuning control). The spiral scale on this dial is calibrated in two ranges 2.4 - 6.5 MHz and 4.8 - 13.0 MHz. The overall scale length is 46 inches and the law is such that 12kHz per millimetre is obtained at the worst part of the scale. The calibration is standard for all sets. Individual final calibration is effected by tracing the calibration line on the cursor.

The use of an output circuit ganged to the oscillator circuits and a separately tuned aerial circuit, has the advantage that the output stage cannot be overloaded by mistuning the aerial. 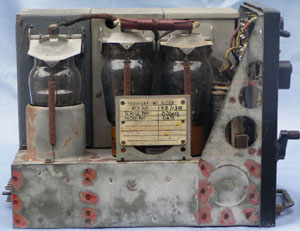 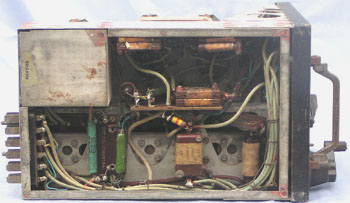