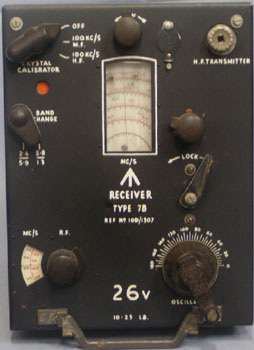 This unit is part of the UK airborne ARI-5206 equipment.

This consists of one of each of the following:

The units are housed in matching cabinets, which slide into a rack, engaging with 12 pin Jones plugs at the rear. The modulator unit houses a 26 volt rotary transformer which delivers 500 and 250 volts. Heaters are wired for 26 volts dc.

Output is taken at 560 kHz from the receiver to the modulator chassis, which houses the IF and Audio stages. The unit can be used as a short wave converter into another receiver at 560 kHz, such as the command Q'5er.

In the Type 76 modulator unit there are two EF39 IF amplifiers and an EF39 BF0, with a 6R7 duo-diode-triode as detector, AVC and first audio amplifier. The output stage is an EF50 single ended audio amplifier with a transformer providing various impedance taps for headphones.

The receiver also features a plug in Desynn motor for remote vernier control of the local oscillator frequency. 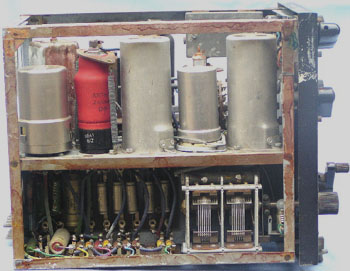 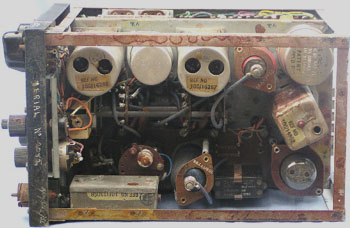