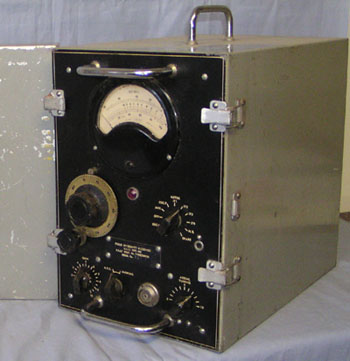 Click to view circuit (large) in a new window.

The A22 was one of a number of test instruments specifically designed in support of Australian RDF (Radar) installations.

The specific task of this instrument was to aid the measurement of radar antenna performance patterns and it could also be used for general signal strength measurements on a radar station. Like many units of its day, it was known by many various names. It was also PMG unit T5, Receiver Field Strength Type P and in the R.A.N., Pattern No (Aust) 207.

It is basically a superhetrodyne receiver covering the range 160-190 mc/s, with an intermediate frequency of 30mc/s.

The unit contains seven valves, two acorns type 955 as RF amplifier and Oscillator, four 1852 (6AC7) as wide band 30mc/s amplifiers and one 6H6 as the detector.

Performance: The units have a sensitivity of 7 microvolts for signal equal to noise and a bandwidth of plus/minus 300kc for 3db off resonance. Their signal handling range is 100 millivolts to seven microvolts.

These units are historically important as they represent the era when Australia was one of the leaders in radar development world wide. The equipment was very ruggedly built, but unfortunately not all that practical for use when WW2 was over and radar had moved up to the microwave region. Many have been pulled apart by experimenters, so it is difficult to find complete units.