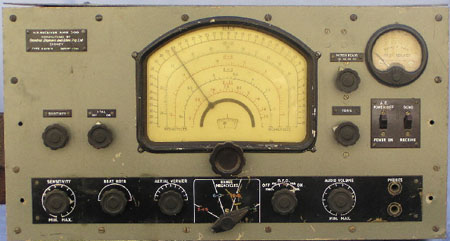 The AMR300 was one of 3 groups of receivers developed by STC, Sydney, Australia, for the armed services during WW2. The original receivers were identified as A679, usually A679-H, A679-J and A679-K.

These sets in the first instance were designed and manufactured for the R.A.N. and R.A.A.F. The differences in type numbers reflected changes to cater for a variety of different applications.

The identifier AMR300 did not come into being until 1945 when the US services required a HF communications receiver - this set improved on the previous models and included temperature compensation of the local oscillator and Faraday screens to enable the set to be used successfully with direction finding systems.

The set had a sensitivity of 2 microvolts.

The valve line-up is as follows:

The IF frequency is 455kHz. In its original form, the audio output was 40mw into 5000 ohms connected across one phone jack and 2 watts at 600 ohms across the line terminals.

The oscillator stability is, after 10 minutes warm up, less than 0.05% of the operating frequency on any range.

The HT line at the output tube was appx 230v dc, with 215v ac being applied to the plates of the rectifier.

The receiver was in high demand by radio amateurs and short wave listeners after the war and commanded high purchase prices from disposal outlets. Unlike other sets of similar performance produced during this period, the AMR300 series did not use plug in coil boxes, which made them easier to use and somewhat tidier! 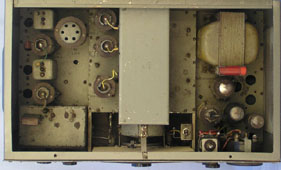 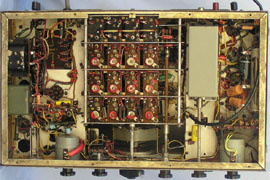