The APN-1 Radio Altimeters were installed in aircraft to provide direct measurement of altitude relative to the terrain during flight.

The equipment is a radar altimeter using an FM transmitter and receiver in the 420-460 mc band. The transmitter signal is FM modulated by an approximately triangular wave signal. The round trip delay causes a frequency difference between the transmitted and received signal at the mixer. The difference frequency is proportional to the delay time = distance = altitude. It measures static difference.The height above ground is indicated on a cockpit mounted meter. A limit switch, featuring pre-selectable heights above ground enables the pilot to fly at a preset level. A set of 3 indicator lights are used to warn the pilot of the altitude in regard to the selected level - too high, too low or stable. This facility also can be connected to the automatic pilot in the aircraft - the lights change in response to the auto-pilot information reaching the APN-1.

The equipment was supplied in both 12 and 24 volt models. High tension is supplied via an inbuilt dynamotor.

The transmitter consists of a pair of 955 acorn tubes in pushpull configuration, modulated via a wobbulator driven by a 12SJ7 audio oscillator.

The set used a pair of antennas, usually separated by the body of the aircraft. One antenna was for transmit, the other for receive.

Typical operating current at 27 volts is appx 3.0 amps with both indicators operational.

The APN-1 was often wrecked for a source of parts. There were many successful attempts to use the sets on the 432 mc amateur band. The range was however limited, as the power output of the transmitter was around 100 mw. 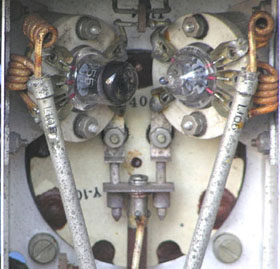 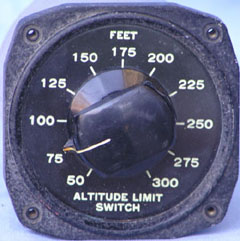 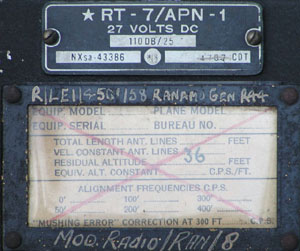