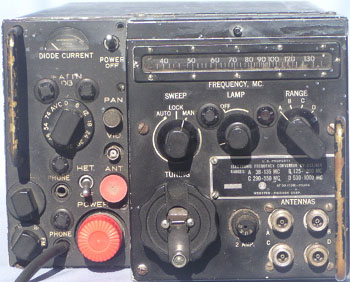 This equipment was a Search Receiver for use on aircraft or naval vessels. When supplied with all tuning units the system was used to:

2. Determine what modulation may be present on these signals.

3. Give an indication of the relative field strength of these signals.

The equipment was first used in 1944 as APR4, using octal tubes and acorns, but over the years the equipment was modernized, using miniature tubes (APR4Y) and a multi-band tuning head (CV253/ALR). The APR4Y had reached U.S. disposal sources by 1965. (See CQ October 1965 p33)

The main receiver features a 30MHz IF channel, with provision for wide or narrow passband. There is provision for panoramic and video outputs for signal analysis. A BFO is provided for weak carrier detection and CW. The set has a calibrated IF gain control. High (8000 ohm) and low (600 ohm) audio outputs are provided. The APR4 has AM and CW detectors, while the APR4Y also demodulates FM.