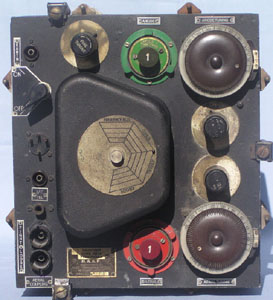 The AR14 Receiver was built by Radio Corporation (Astor) for the R.A.A.F. in 1942. The set was to be used in aircraft, as a substitute for the R.A.F. R1082 receiver, which was becoming unprocurable. A matching transmitter, type AT10, was built by Transmission Equipment Pty Ltd, Melbourne, to replace the T1083.

The receiver is a TRF design, an Australianized version of the R1082. The range from 111 kc/s to 15Mc/s was covered by 8 sets of plug in coils, Aerial and Anode coils being colour coded to avoid confusion. The coils were numbered 1 to 8, opposed to the R1082 coils, which were labelled alphabetically.

The valve count was reduced to 4 by using a 1D8, which was used as a triode amplifier and pentode power amplifier. The RF amplifier was a 1J6 feeding a 1P5. The RF output was fed to another 1P5 acting as detector. The resultant audio was fed to the triode of the 1D8.

The design of the audio circuit made provision for an intercom amplifier.

Power requirements were 1.4v for filaments and 90v for HT.