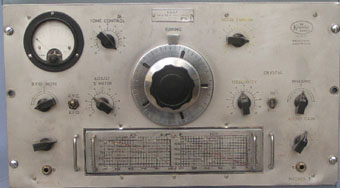 The AR7 was produced during WW2 by Kingsley Radio of Melbourne for the R.A.A.F. These receivers were used in ground stations for long range communication over fixed circuits as well as for receiving signals from aircraft.

The AR7 was based largely on the National (USA) HRO model, a fact that did not go unnoticed by National. This was the subject of litigation during the war years. Over 3000 of these receivers were produced and for their time, produced excellent performance.

These sets were very popular with radio amateurs after the war and unfortunately subject to many modifications. The Wireless Institute of Australia station, VK2WI at Dural New South Wales was equipped with modifed AR7's for many years. I seem to remember that very local operators could block the receivers completely, resulting in hurried phone calls!

An unmodified AR7 is a rare beast. The Department of Civil Aviation used these sets for many years in a highly modified form, requiring a new front panel. Refinements included squelch and crystal locked coil boxes.

The set features 2 RF stages, a 6K8 mixer oscillator; 21F stages, an audio and output stage and a 6C8 double triode as a BFO and S meter amplifier. The set was supplied with 5 plug in coil boxes, enabling the range I25kc to 25mc/s to be covered. There is a crystal filter and a multi-tapped output transformer. There is provision for 2 sets of headphones as well as 600 and 1750 ohm outputs.

The set was supplied with a separate power supply, capable of 240 volt ac and 12 vdc operation. This was comparatively large and bulky - but it was very stable. There was a tendency for experimenters to build physically compact domestic receiver type power supplies to run the sets - unfortunately this made the receiver much less stable.

Detailed information on the receiver was hard to find after the war. The SWL section of the W.I.A. produced a version of the AR7 manual, copied from the original Kingsley handbook. A proper manual was produced by the R.A.A.F. towards the end of the war, but they are quite rare.

The AR7 went through many modifications in service, some may be found with a cathode follower for RTTY added - there was also a modification to fit a panoramic adaptor. A diversity reception adaptor was also produced utilizing a multi-channel crystal locked oscillator.

The AR7 even today would form the basis of a good short wave listener's receiver.