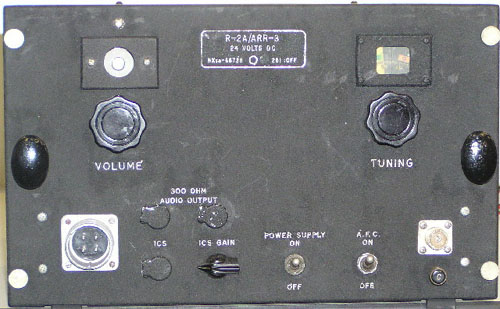 Sonobuoy receivers are usually mounted in aircraft. They are used to listen to signals coming from Sonobuoy transmitters which have been dropped in the water by search aircraft. The transmitters use underwater microphones (Hydrophones) to pick up sounds in the ocean. It is common to drop numerous buoys over an area in an attempt to locate submerged craft.

The transmitters are on different frequencies, usually identified by colour or letter. Hence, the receivers are calibrated not in frequency, but by channel letters or colours.

The ARR-3 is a single conversion superhet FM receiver covering 60 - 75 mc/s. The unit itself is powered by 24volts and has an external dynamotor power supply. It is the subject of an article in Wireless World, November, 1958, page 544, by Capt R.V. Taylor. This article describes conversion to the standard FM broadcast band. There is a great deal of useful information in this article to enable the unit to be powered up as is.

The valve line up uses 12SG7 pentodes for the 2 RF stages, mixer, local oscillator and 2 IF stages. The discriminator is a 12H6, with 2 AF stages using 12SQ7 and 12A6 along with 2 AFC stages and a limiter using 12SH7's and a 1629 as the tuning indicator. Within the audio stages is intercom provision for crew communication. The IF frequency is 5 mc/s. Audio output is from two 300ohm sockets on the front panel.

As the original valves are 12v heater types with a 24 volt series parallel feed, conversion would be simplified for 12v operation by substituting 6v equivalent tubes. An HT supply of around 250 vdc is required.

As the frequency range of the receiver covers low band TV channels and part of the VHF Lowband carphones, there are things to listen to. When I turned my set on for the first time I heard some dreadful noises - It turned out to be Dr Who having an altercation with some Cybermen!