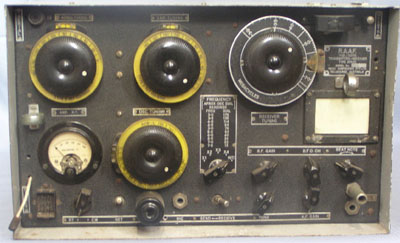 The ATR2B is a mobile equipment designed for the reception of RT, MCW or CW between 3.0 and 7.5 Megacycles, and the transmission of either CW or RT at any four spot frequencies crystal controlled or any MO frequency within the range of the receiver.

This transceiver was built from two wrecked units donated to the museum by Harry Mead VK2BJL and the late Keith Howard, VK2AKK.

The restoration was done in July 1991. Neither set came with valves and both had additional major deficiencies, however the two units provided sufficient parts to make a complete set.

Electrical restoration was undertaken as a first step to establish that there were not problems with major items.

The receiver was operational in 45 minutes, although additional work had to be undertaken to bring the performance up to scratch. The major headache was in the transmitter oscillator, which had to virtually be rebuilt owing to almost all components in the circuit being faulty. No work has been done on the modulator or P.A. as it is not intended to put the unit on transmit.

When the unit was proved to be working satisfactorily, the front panel was removed, sandblasted, primed and painted. The case of the unit was in poor state, however it has been rejuvenated to suit.

This equipment was operated in conjunction with power supply K1 for 240v operation.

Circuit Descriptions: The receiver is of the superhetrodyne type, using one RF amplifier (6U7) ahead of the converter. (6J8) This is followed by 2 IF amplifiers (455 kcs), followed by a diode detector. (6U7 and 6G8) The audio frequency amplifier is a 6J8, the triode of which serves as a BFO. The audio output tube is a 6V6, triode connected.

The transmitter uses a pentode oscillator (6F6) which drives a beam power amplifier (807). When the unit is being used for R/T, a second beam power tube (807) is used as the modulator.