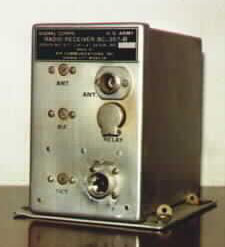 The BC-357 was designed for use in U.S. Army Airforce aircraft during WW2.

Such signals mark the approach to a runway. The receiver demodulates an audio signal, which triggers an internal, highly sensitive relay. This relay turns an indicator light on in the aircraft cockpit, indicating that the marker has been reached.

As there were numerous types of equipment generating marker signals, careful design was required to overcome variations in power output and modulation frequencies of the various devices. The receiver is most sensitive when fed with 3000 Hz modulation (to suit civil 5w transmitters) and least sensitive with 60 Hz modulation, to accommodate the military 20w transmitters.

VT-153 (12C8) in a reflex circuit functions as a rf amplifier, detector and af amplifier. VT-104 (12SQ7) is an af amplifier and rectifier, which supplies current to the relay.

The antenna is a horizontal, resonant line, fed off centre, to accommodate 75 ohm feedline.

The length of time the cockpit light remained on depended on the height, speed and type of signal source. Cone of Silence transmitters provided up to 1 minute of indication at 10,000 feet at 150 mph.

The receivers had little practical use for post war experimenters, but the sensitive relay and metal work provided the basis for an excellent proximity switch.

The BC-1023 is a variation. It is of the same physical size and external appearance, but uses more tubes. It is designed to run off 12 or 24V DC - this being used for HT as well as filament voltage.