The SCR 522 is the American version of the British TR 1143 transceiver. Although external connections for both units are the same and major units are interchangeable, the internals are quite different. (This may answer the question of why there are such weird sockets on this equipment.)

The American SCR522 has its own British type number as well, just to confuse the issue, which is TR5043.

They operate on any one of 4 crystal controlled channels lying within the frequency range 100-150 mc. Remote control only was available.

Transmitter channel D was frequently used as a special use channel, which was automatically selected at regular intervals by the action of Contactor Unit BC 608A, which caused a signal to be transmitted for 14 seconds in every minute for DF purposes.

The set operated from 24 volts D.C. and obtained auxiliary voltages from a Dynomotor Unit, type PE-94. The transmitter required 11.5a and the receiver, 11.1a at 28v. The dynamotor produced 300v HT, minus 150v grid bias (Tx) and 13v for heaters, relays, channel change etc.


The transmitter output was 8 to 9 watts.

The sets were very popular on 2 metres, with transmitters in use up to the 1970's, when they were replaced with even smaller blaek boxes of the ssb type. Unfortunately the 522 Tx was prone to TVI problems, and had to be heavily shielded to obtain peace from the neighbours. Many an Australian Amateur started in the hobby with an SCR522 transmitter and a crystal locked VHF converter, feeding an HF receiver from the services.

The 522 was even converted to operate on 6 metres - then you really did have a first class case of TVI!!! 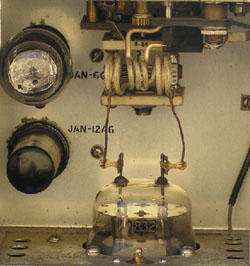