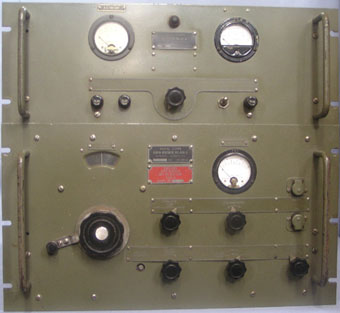 The BC-639A is a ground based AM VHF receiver covering the nominal frequency range of 100 -156 m/cs. The set was built for the U.S. Army Air Force in WW2 as part of a communication system to communicate with aircraft. The matching transmitter is BC-640.

A system of similar intent was built in Australia during WW2 by Radio Corporation of Victoria (ASTOR), with the addition of FM facilities. This system used the ARl7 receiver and ATl7 transmitter.

Many of the sets had been modified after the war by the then Dept of Civil Aviation for use as monitoring receivers. The mods included work on the front end to improve performance and modification of the audio output stage to allow a low impedance loudspeaker to be used for local monitoring.

When used with a suitable outside antenna, the receiver performs quite well, with very strong aircraft signals being received without difficulty.

The BC-639 is a single conversion superhetrodyne, with a 12 m/cs IF, continuously tuneable over the above frequency range. The receiver shares many of the components found in the 4 channel crystal locked airborne BC-624, which is the receiver of the SCR522 equipment.

A CW oscillator is provided. Three 6SG7's provide the IF gain, whilst provision is made for local or line audio output.

An "S" meter is provided to ascertain the signal strength of incoming aircraft transmissions.