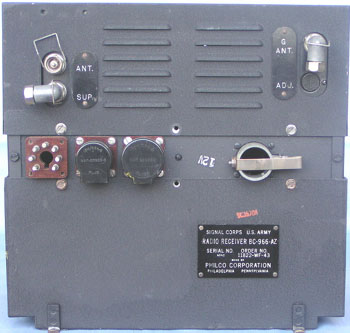 Click to view Wiring Diagram in a new window.

This unit formed the aircraft part of a WW2 aircraft Identification Friend or Foe system.

The system worked over the frequency range 157-187 mHz and operated as a transponder. This transponder was designed to be interrogated by allied ground based radar.

The unit scanned the whole frequency range in about 2.5 seconds, enabling the operational frequencies of all appropriate allied radars to be covered. A coded reply was sent, a choice of 6 selectable responses being available to be chosen by the aircrew.

The BC966 belonged to the Mark 3"G" group. This set could additionally generate a pulse directly on the screen of GCI (Ground Controlled Interception) Radar. The "G" transmitter antenna socket can be seen in the top right corner of the set. A "G" button on the control box was used to activated this feature on request.

As the role of this equipment was the identification of friendly aircraft, it was rather important that it did not fall into enemy hands. To reduce this possibility, the equipment was fitted with 2 detonators, electrically fired, to ignite a high explosive pellet. Some of these sets actually were released with the charge still fitted, and there is at least one report of an experimenter requiring a new side for his garden shed.

Associated test equipment includes Receiver BC-1066 and Signal Generator I-96. These units were used for ground adjustment of the equipment prior to flight.

The BC 966 contains a great number of parts, but the very nature of the equipment did not lend itself readily to amateur use, so most were reduced to parts after the war. It is unusual to find a complete unit.

For an excellent description of the operation of this equipment in WWII and a list of the various models see Colin Mackinnon's IFF web page. 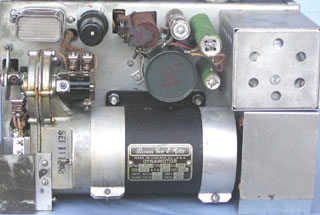 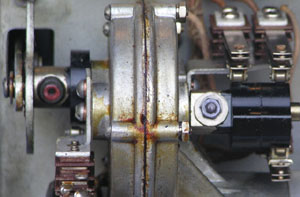 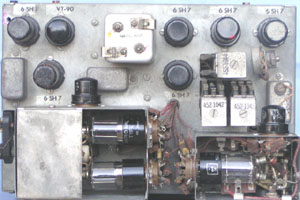