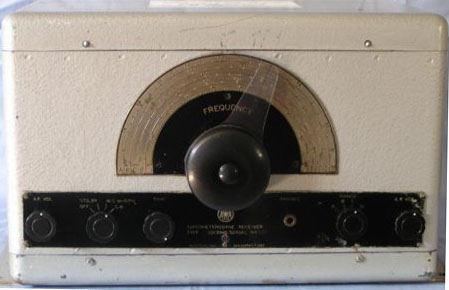 Click to view circuit diagram in a new window.

AWA designed a group of marine receivers in 1940 which were used by the Royal Australian Navy and the merchant marine. There are 3 main variations. There is a low frequency 2 band receiver (LF model), a 4 band medium frequency model (MF model) and a 3 band high frequency model. (HF model)

Within the 3 groups there are small variations. The various models are identified by numerals placed in front of the C6940. The model pictured is a 10C6940 MF receiver, commonly called the main receiver in ship board installations.

These receivers are similar to and often mistaken for the Coastwatcher Sets, type C6770.

The radio is a 6 valve superhet and is capable of AM, MCW and CW reception and is unusual in that it is designed to run off lead acid batteries ï¿½ 6 volts for the LT and 120 volts for the HT.

This particular set came from Sydney Radio, VIS at La Perouse. It came to this museum courtesy of the Telstra Museum, Bankstown. The shipping note on the receiver indicates it was repaired in 1985. It was released from La Perouse in 2006.