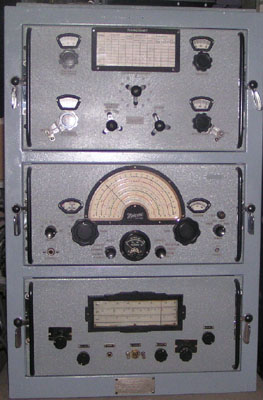 Click to view Transmitter Circuit in a new window.

The Canadian Marconi CM11/TM11 was produced originally during WW2 and stayed in Canadian Navy service into the '60's.

The set was supplied in two formats. As CM11, the unit consisted of the CM11 transmitter, ATU, CSR5 receiver and the ZM11 Power Supply.

The set is not for the passing collector, as it weighs in around 478lbs.

The unit was also supplied as a TM11, which consisted of all of the above apart from the CSR5 receiver. The receiver panel was supplied blank, with local manufacturers able to fit equipment of their choice.

The transmitter is capable of covering the range 375 khz to 13.8 Mhz, less the broadcast band. Power output was 100 watts CW or 30 watts AM. The internal antenna tuner could match any antenna from 5 - 750 ohms resistive between 515 Khz and 13.8 Mhz.

The CSR5 receiver covered from 80 khz - 30Mhz. It could be supplied also as a stand alone unit, with a VP3 Power Supply. The total weight of the receiver is 69 lbs. The receiver has a 4 position, selectable, IF band pass filter.

The display unit was manufactured in 1944 and was removed from the "John Oxley", which spent the war years on torpedo net duty at Sydney Heads. The unit was supplied by AWA and contained one of their shipping receivers, covering 300 khz - 8 Mhz in 3 bands. The receiver has an RF stage and a BFO - apart from this it is no different from their standard domestic models.

Acknowledgments: Sydney Maritime Museum, for the supply of the TM11.