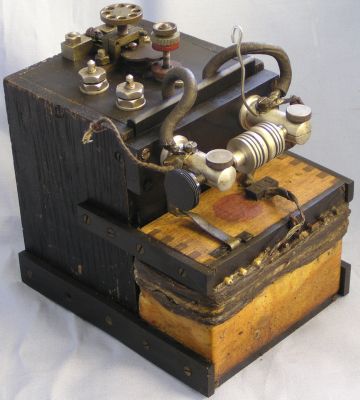 This set was introduced into the British Army in 1916 and was put to large scale use in the Autumn of 1917. It was supplied in two frequencies - 80 metres (3750kc) and 65 metres (4615kc). The set was designed for unskilled operators and was highly portable as opposed to earlier sets.

The set up comprised two stations, one at the front, the other at the rear. The front station transmitter had a metal loop about 1 metre in diameter. (Hence the name Loop Set.) This was mounted on a bayonet at ground level and was not easily spotted. The receiver aerial was two lengths of wire about 10 metres long. Receivers at both ends were heterodynes, so not much transmitter power was required.

At the rear station a conventional aerial of 7.5 metres supported by 2 tripod masts were used. Both stations used 6v batteries for transmit and 4v for receive and had a reported range of 2 to 3 miles..

The handbook for the equipment was issued as Technical Instruction No 4 November 1917.

It must be the only piece of equipment that has more words in its name than components in its construction.

The equipment item in the Museum is the Rear Spark Transmitter. This equipment was kindly made available by the efforts of Jack Milne (SK) VK7AG (1925), Robert Milne VK7ZAL and Richard Rogers, VK7RO. No doubt this set would have been used on the amateur bands by VK7AG pre WW2.