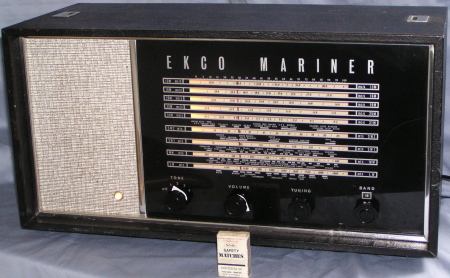 The EKCO Mariner Receiver is a 9 band receiver manufactured by E.K.Cole in the U.K. It is a most imposing looking device, with dimensions not unlike a B40, with more bands, less weight but much poorer performance. The set is a 4 valve marine cabin receiver with a communications receiver look - but that is where the resemblance ends.

It is one of those dreaded AC/DC sets - transformerless and deadly. These sets were produced in an era when DC supplies were still used aboard ships. The normal approach was to design a set that worked off 110v dc HT and 110v dc filament supply. Now you know why some European tubes have ridiculously high filament voltages. The filaments had to be in series to make 110v! Suitably tapped resistors were fitted for supplies above 110v. 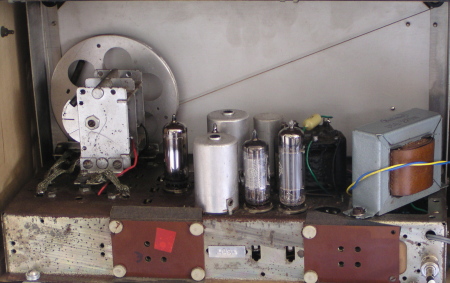 With the danger of zapping oneself on 240vac (live chassis!), it is a good idea to re-design the power input circuit. The first thing to do is to find equivalent valves with 6.3v heaters and fit a power transformer to supply the heaters and suitable high tension of 110vdc or above. This approach worked fine with this set and it is amazing how well the set performs with new 9 pin valves.

There is a front cover to put on the receiver when not in use. The rear of the cover has a short wave station guide, featuring a map of the world. Logging overseas stations using this receiver in European waters would have been a breeze because of the relatively short distances to the mainland but unfortunately for ocean going vessels it is a harder challenge.

Many domestic receivers use a triode as the audio amplifier, usually with a duo-diode in the same envelope. Substituting a pentode results in a great deal more audio output, really necessary for the short wave bands. In this case the equivalent tube was a 6BD7. By replacing it with a 6N8 and a slight socket re-wire and 2 added components, the performance was vastly improved.