This receiver was developed in the U. K. during the second half of WW2 mainly for use in clandestine operations.

Around 10 000 of these receivers were apparently manufactured. To confuse the enemy, as with most sets of this nature, serial numbers were "inflated" to make it appear as though many more were produced.

The receiver was supplied in a 2lb tin of "Huntley & Palmer" biscuits! Included in the tin as well as the receiver were the 4 interchangeable coil boxes, associated batteries for portable operation, a set of light weight low resistance headphones (120 ohm), AC/DC multi-input voltage power supply, 30' of antenna lead and a 10' earth wire.

The mind boggles when one imagines some poor soul at a disposal auction purchasing a large batch of "biscuits", only to find they are much harder than ginger nuts!

The receiver is a 5 valve superhetrodyne, of amazing sensitivity, utilizing miniature 7 pin l.4volt battery valves. Reaction was provided to enable the set to be used to detect CW signals. By carefully adjusting the reaction control, enhanced sensitivity on AM could be obtained.

The four wave bands were obtained by plugging in individual coil boxes. Without a coil box plugged in, the pins at the end of the receiver were vulnerable to damage. 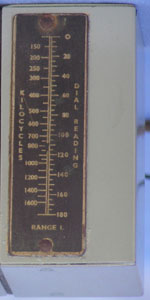 With no matching transmitter, operatives were only able to listen for messages. No doubt many of the strange wartime BBC messages (eg "there are 3 apples on the orange tree") were meant for these receivers.

The set was officially known as Midget Communications Receiver Type 36/l. It was described as being mounted in a sealed watertight tinned steel container holding a sealed cardboard carton. (Weight 15 1bs l4 ozs)

There were 4 controls - Tuning, Reaction, Sensitivity and Antenna Trim.

The audio output is 5-8 milliwatts.