This set was essentially designed as a welfare receiver, filling the same role as our local Amenities series of receivers. It was designed to be used by the British Army, in canteens etc.

It has also been claimed that it was often ealled an invasion receiver, as BBC frequencies were monitored continuously with it, where invasion warnings were to be broadcast.

There were 3 versions of the receiver, known as PCR, PCR2 and PCR3. These sets differed in frequency range and manufacturers. The PCR was produced by the Philips Lamp Co in the U.K., while later models appear to be the work of Pye. (U.K.) The first model was the only one with a loudspeaker inbuilt, electro-dynamic at that. 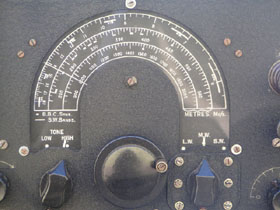 These sets formed the basis of a very cheap short wave receiver. They did not have a BFO, but they had plenty of room for an inbuilt power supply and BFO, with a "spare" valve hole already cut in the chassis.