Click to view Block Diagram in a new window.

This receiver is a digitally tuned superhet, capable of receiving LSB, USB, ISB, FSK, AM and CW transmissions in the range 2-30 mHz.

The receiver is designed to be used as a stand alone device or as part of a transmitter-receiver system as in the AN/WRC1 and to work off 115v ac.

The set may be used in a 19" rack or may be supplied shock mounted. When the external mounting accessories are removed, the unit may be table mounted. Roller slides are fitted inside the case, so that the radio may be slid out and rotated in situ for servicing. 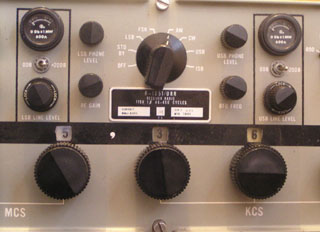 The set may be tuned to any one of 56,000 operating frequencies.

Apart from the 2 RF Amplifiers, the remainder of the set utilizes solid state devices. The frequency stability of the set is excellent, due to an oven controlled standard.

Sensitivity is 1uv for SSB, 2uv for CW and FSK and 4uv in AM.

Audio output is 60 mw minimum into 600 ohm bal or unbal into a remote output load or 15mw into the local headset.

Because of the ISB capability of the set, 2 audio channels are provided. Distortion is less than 3 %.

Although the set is quite attractive to look at and very collectable, be warned that the sets are very troublesome to keep in service because of capacitor faults. Problems in the front end require superhuman effort to fix because of the complex mechanical arrangements.

These sets were originally built for the U.S. Navy for ship and shore installation by General Dynamics, and later , other contractors in the early 1960's.

In 1999 they were still in use by the Australian Navy.