The R107 is a 9 valve superhet receiver designed to receive Morse and voice transmissions and was the main communication receiver for the British Army during WW2.

The frequency range is somewhat limited compared to that of the main receivers for the other services at that time.


Sensitivity is quoted as 1 uv on CW (20db s/n) and not more than 6 uv on AM - both measurements on narrow bandwidth.

The set has 2 positions of selectivity and has an audio filter centred at 900 cps for CW working.

It has a dual AC/DC power supply which is internally adjustable from 100-250 vac and 12vdc operation may be selected by an internal switch. The set draws 31 watts on AC operation and 3.0 amps on dc operation.

There is provision for dipole and long wire aerials. High sensitivity enables the set to perform satisfactorily on 20' of wire.

A feature of the set is the limited number of valve types used . While of no particular benefit for the radio collector, it would certainly have reduced the number of stores required to be carried during the set's service life. The valves used are types ARP34 (EF39), AR21 (EBC33) and 6X5G rectifier.

There is an internal monitor speaker fitted on the front panel as well as 2 outputs for low resistance headphones. There is also a 600 ohm line output.

A muting and sidetone socket is also provided to enable the use of a remote control unit or associated transmitter.

The set was one of the few types released that could be readily plugged into the mains and used without modification. The sets are quite large and very heavy. Where space is a limiting factor this is perhaps one to be avoided.

They do have a place as a collectable item as they represent for the British Army what the B28/CR100 does for the Royal Navy and the R1155 for the Royal Air Force. 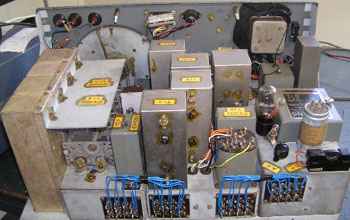 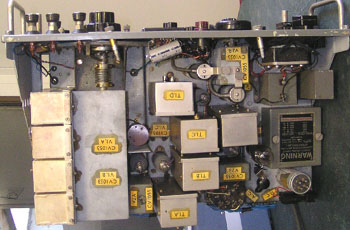 View of underside and RF section. 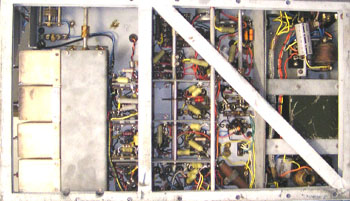 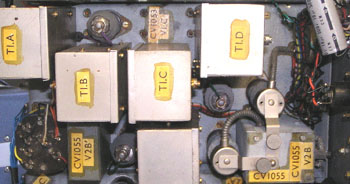 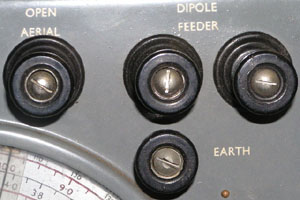 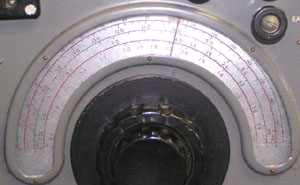 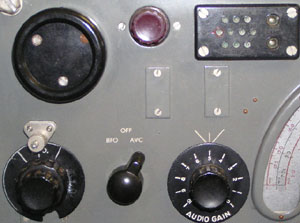 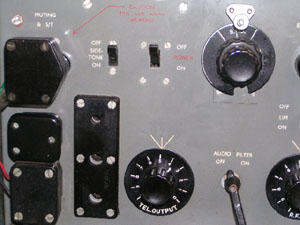