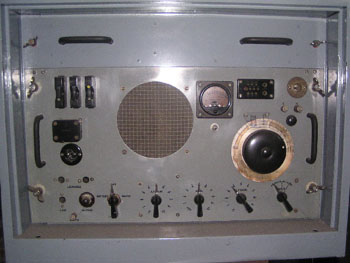 The R208 is a superhetrodyne Receiver designed for CW, MCW and AM reception modes. It was designed to be used for long distance reception or local broadcast service as well as for mobile use in vehicles in forward areas. The set is often associated with the Sender #36, as it was used for local communications in anti-aircraft units.

The frequency range covered by the set is rather unusual, as it covers the high end of the HF spectrum and the low end of the VHF spectrum. This enabled the set to be used for long range work using the HF ranges and for very localized work on the VHF ranges.

The set is designed to run off a.c. mains as well as 6v d.c. The receiver features an RF stage, using an EF39 (ARP34), a 6K8 mixer, followed by 2 IF stages utilizing another EF39 and the pentode of another 6K8. The 6K8 triode functions as a BFO for Morse reception. A 6Q7 is used as a triode audio amplifier, with the 2 diode functions being used for detection and AVC. A 6V6 is used for the audio output stage.

The audio output is 2 watts to the internal loudspeaker. There is provision for 2 sets of low resistance headphones. Line output at 600 ohms is also provided.

Aerial input impedance is quoted as 80-100 ohms. The recommended aerial is a dipole, preferably coaxially fed.

The IF frequency is 2MHz, with the BFO running at 500 kHz.

Filament voltage is 6.3, with smoothed HT quoted at 205 vdc.

The receivers were frequently advertised in the late 1950's as "Sputnik Specials", as the frequency ranges covered included some of the early satellite frequencies. (Sputnik operated a fraction above 20 MHz.) It should be pointed out that there were many superior receivers available from disposals at that time that would have easily outperformed the R208. Perhaps the unusual frequency range and the sheer physical size of the receiver required a gimmick to sell !!!!!

Here was a ready made receiver for the 6 metre band - there were precious few receivers that tuned the 6 metre band at the time of their release, so there would have been a demand for them from amateur operators in Australia.