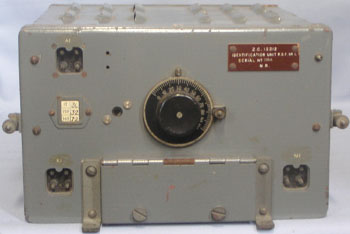 The RDF No1 is an I.F.F. (Identification Friend or Foe) Responsor. It is basically a VHF superhet receiver, configured to drive a visual indicator unit. The unit works around 170 Mc/s, each unit having a calibration chart on the front panel to facilitate tuning.

These units were generally ground based, being often associated with search light radar. The "RDF" refers to radio direction finding, a title often used to hide the real use of the equipment.

How the unit worked : Allied aircraft were fitted with I.F.F. equipment which mechanically swept the radar frequencies used by the allies, typically in the 165-220 Mc/s range. On receipt of a signal from ground radar, the IFF transponder on the aircraft transmitted an identification pulse, which was picked up by the ground responsor. The pulse was then displayed on a cathode ray tube. If a pulse was returned, the aircraft was deemed friendly and not fired upon. No doubt forgetful people had a sudden reminder to switch their IFF on!!!

The units had wide band receivers and although hundreds of units were released after the war, they were not very useful. A few brave souls used them on 2 metres - they were great until more than one signal appeared on the band. All signals tended to mix together. Most were wrecked for parts - even then there was not much of use in them.

The RDF No1 comes with a built in power supply - but this was designed for 80 volts at 2000 cycles.