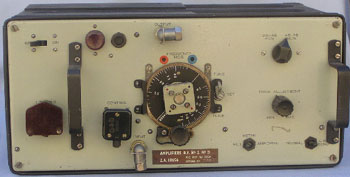 The RF Amplifier No 2 was developed for the British Army during WW2 as an adjunct to the Wireless Set No 19.

The unit works on transmit only and is designed to boost the modulated output of the set and therefore increase the working range.

The wiring harness was modified to provide pressel (press to talk) operation in conjunction with the existing system in the WS 19. Sets thus fitted were known as HP (high power) sets.

These amplifiers were also used later with the WS 22 sets, which became known as WS22 HP.

The amplifier covers the frequency range 2 - 8 Mc/s in 2 ranges. Specially selected sets could give full power over the range, others gave somewhat less.

The amplifier is fully self contained, with an inbuilt rotary transformer. The set was built using modified No 19 metalwork.

Inductance Aerial Tuning No1 was used with the amplifier. This is a rotary inductance. The standard variometer could not be used as it could not carry the RF output of the amplifier.

These units are relatively hard to come by in original form. With the introduction of SSB, many of these were modified to be used as linear amplifiers on 3.5 and 7.0 mc/s by radio amateurs. Usually the rotary transformer was removed and replaced by a mains transformer. It is unlikely that many of these units were used after the introduction of television, as they have all the trappings of excellent TVI generators if used as is.