The Gibson Girl was produced in the U.S.A. during WW2 for use in liferafts as emergency communication device.

The design was based on the German Notsender N82, an example of which was captured by the British in the English Channel in 1941. This set formed the basis of the Type 33 (UK) transmitter, carried on RAF bomber and reconnaissance aircraft.

The U.K. did not have the manufacturing capacity to produce the numbers required and the initial contract for 11,600 sets was given to Bendix, with the first sets available in May, 1942.

The Gibson Girl was superior in design to the German and U.K. models.

The complete set weighed 34 lbs with accessories, including parachute. The set was designed to be thrown into the sea with the liferaft from the ditching aircraft.

The name "Gibson Girl" refers to the shape of the unit, which resembled the waists drawn by the noted fashion designer Charles Dana Gibson in the 1890's.

Power was derived from a double voltage hand generator, delivering 28v LT and 330v HT. The turning speed was 80 r.p.m. In addition to radio transmission, the set could be used as a hand powered signal light either as a steady light source or keyed automatically or by hand. The signal lamp was plugged into a socket provided and mounted on the top of the head, secured by a chin strap.

The antenna could be raised in two ways, either by a box kite supplied or by a 4 foot balloon, inflated by the use of 2 hydrogen generators, which were activated by placing them in sea water.

The set was operated by strapping it between the legs and turning the generator handle. It was no easy task! 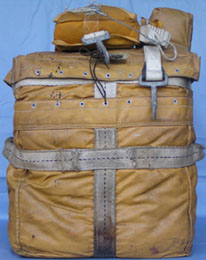 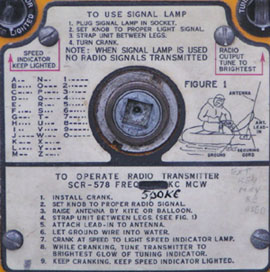 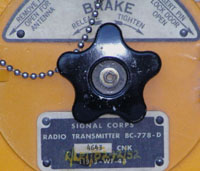 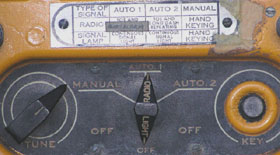