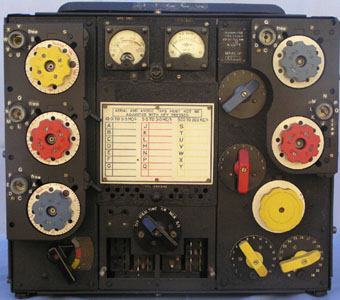 Click to view Circuit or a T1154 and R1155 web site with detailed information including photos, circuits and layouts in a new window.

The T1154 was produced in quantity during WW2 by the Marconi Wireless and Telegraph Company in the U.K.

The matching receiver for the whole series was the R1155.

There were 13 production varieties of the T1154, the principal differences between them concerning frequency coverage and the provision or absence of voice facilities. 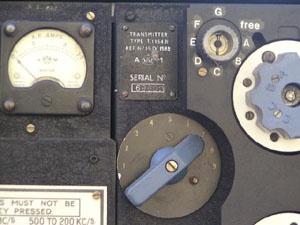 Component variations in the drive and output units, modifications of the "click stop" mechanism for rapid selection of pre-set frequencies, and the use of steel or aluminium cases account for further versions.

The T1154B was limited for use only in Halifax bombers, while the T1154F was used in the Sunderland and Halifax aircraft, as was the T1154H.

Two aerial systems were used. A fixed aerial was used on HF, with a trailing aerial being used on MF.

Power was supplied by the standard aircraft battery system, either 12 or more commonly, 24 volts. Other voltages were generated by two rotary transformers, one generating 1200 volts.

The transmitter consists of a master oscillator driving two pentode power amplifiers in parallel. A triode operates as a modulator or 1200 cycle oscillator for MCW.

The T1154 series are probably best known for their use in Lancaster Bombers.

Many sets now in Australia were brought here for fitting in the Australian manufactured Lincoln Bombers.