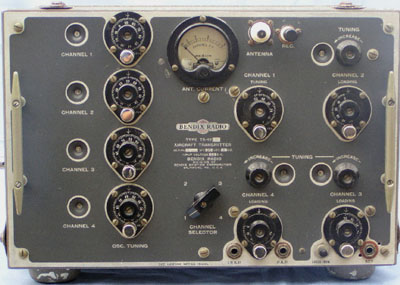 This piece of equipment is of U.S. origin and was designed for use in aircraft.

The set comprises a remotely controlled, 4 channel, 40 watt output, master oscillator type transmitter, together with additional equipment necessary to obtain efficient operation of the transmitter proper. The four channels provide operation in the frequency ranges of 300 to 600 Kcs and 3000 to 7000 Kcs. Facilities are provided for telephone, CW or MCW telegraph operation.

The transmitter delivers 40 watts into an antenna consisting of 10 ohms resistance in series with 250mmf capacitance.

The range of each of the 4 channels is as follows:

The power supply was type MP-28B which normally operated off 25 volts, but the equipment was able to operate from 20 - 28 volts, with corresponding changes in power output.

The equipment was rated for intermittent service - 5 minutes on and 5 minutes off. The set drew 16.5 amperes at 25 volts.

The transmitter consisted of 4 I2SK7 vfo's, one for each channel. Then followed a buffer/multiplier, consisting of a single 807. This was followed by a pair of 807 tubes in parallel.

The power supply unit also housed the modulator. This consisted of a 6N7 and 6F6 as amplifiers followed by a pair of 807's as modulators. The maximum HT voltage in the set was around 540 volts. 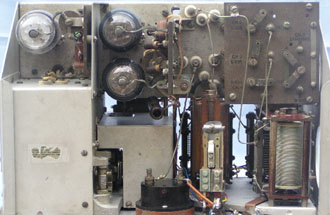 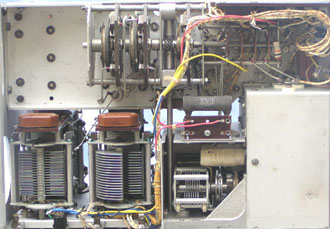 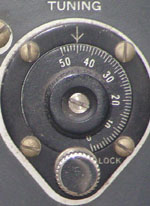 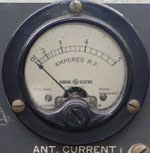