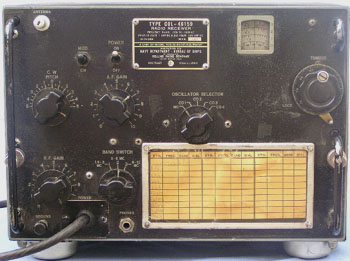 This equipment was originally produced by the Collins Radio Company for the U.S. Navy Bureau of Ships. There are many "marks" of the TCS equipment and many different manufacturers were used to supply the quantities required. The TCS-12 for instance was produced by Collins under a 1943 contract.

The equipment covers the frequency range 1500 - 12000 kc. The transmitter is capable of 25 watts on telegraphy and 10 watts on telephone.

The equipment was much prized by amateurs after the war because of the high stability associated with the VFO in the transmitter. It must surely rank as one of the first "modular" sets constructed. The stability is in large part due to the cast chassis which is very substantial.

Like most U.S. Navy equipment, there was a large chest of spare parts to accompany the set. This contained every part of the set apart from the metal work so that on the spot repairs could be carried out.

The equipment was for use in small ships, PT boats etc. Various power supplies were available for the set, so that it could be operated from 12v, 24v, 1l7vac and 240vac. 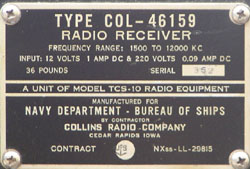 The valve line up is as follows:

The equipment normally operated off a 15 foot whip antenna.

The receive and low level transmit voltage was 225v, while the high power transmit stages operated on 400 volts. 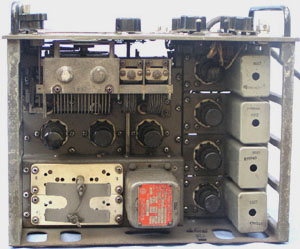 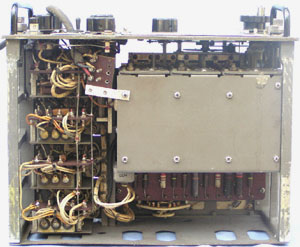