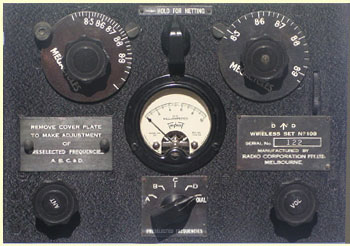 Click to view Circuit or Component Layout in a new window.

Wireless Set 108 was designed and produced by Radio Corporation (Melbourne) during WW2. The set was designed for backpack use by the A.I.F. and was based on the existing British #18 set.

The set evolved over time, with 3 different variants being produced, known as the 108 Mk1, 108 Mk2 and 108 Mk3. The variants must have produced some problems for the army as they were not always able to communicate with each other, owing to differing frequency ranges as follows:

The sets would have found favour for portable amateur operations post war. They were very low powered and had frequency stability problems that would have tried the patience of the operators.

The 108 Mk1 is very rare, as only a small number were made. It was discontinued owing to the very restricted frequency range. The Mk2 addressed the lack of frequency coverage, but it would not perform in the tropics as the frequency was too high and therefore absorbed by the jungle. The Mk3, strangely enough, had the same frequency range as the 208 set!

The sets were all battery operated and featured a 1.5v LT battery and 2 45v batteries connected in series for HT.

The unmodulated power output of the sets was between 0.4 and 0.45 watts depending on the frequency and the length of the aerial. The sets weighed in at just above 26 lbs.

A netting switch was provided to adjust the transmitter and receiver to a common frequency. There was also a 4 channel pre-selector system, which enabled 4 pre-determined frequencies to be quickly selected.

On the left is the Mk II with the Mk III on the right. 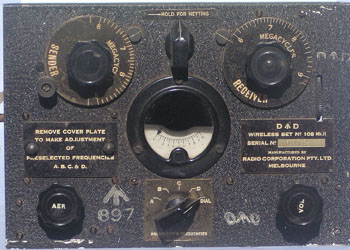 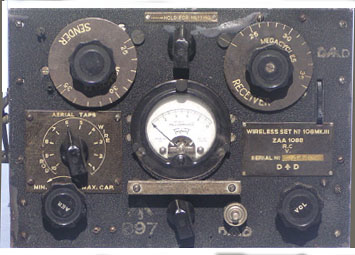