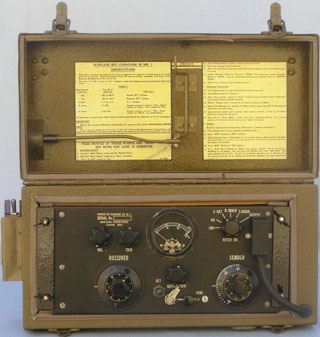 Wireless Set No 58 (Canadian) is one of a number of sets developed during WW2 for short-range R/T communication in forward areas. Other similar sets, all originally based on the specifications of the British Army WS18, include the Australian 108 Mk2 and the U.S. produced WS48.

The set, like the others above, covers the frequency range 6-9 MHz. It is for use on AM only, with a superhetrodyne receiver using an IF of 456 kHz. The transmitter has a power output of 0.3 watts.

The range of the set is given as 3 miles with a 6 foot rod, 5 miles with a 12 ft rod, 4 miles with a telescopic aerial and 2 miles with a 25 ft ground aerial. The set weighs 14.5 lbs, with an additional 15.5 lbs for the backpack containing battery and accessories.

This set is very rare in Australia, as the locally produced 108 set (Radio Corp. Victoria) was used by the Australian Army.